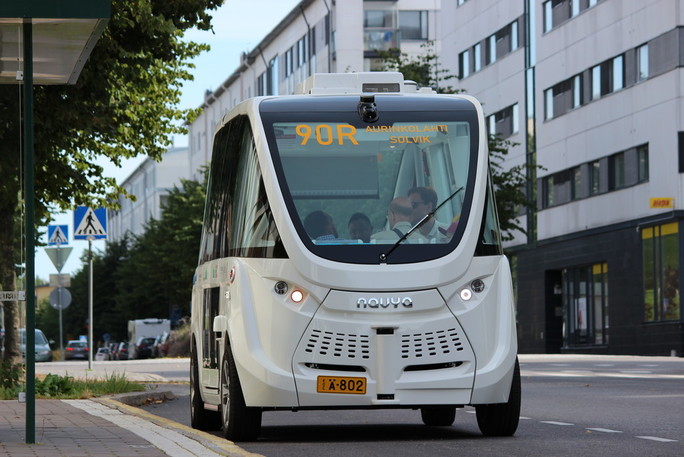 Robot bus route 90R drives in Vuosaari, Helsinki until the end of September 2019.

The capital city of Finland, Helsinki, strives to be carbon neutral by 2035. Various trials have been conducted to find ways to reduce transportation emissions. Smart Mobility projects of Metropolia University of Applied Sciences have introduced robot buses to the streets of Helsinki in residential areas of Kalasatama and Aurinkolahti. The pilot route 90R has attracted the curious passengers with over 2000 visitors taking a ride in less than three months.

The pilot in Vuosaari ends in September 2019, but the Sohjoa Baltic project continues in Tallinn, Estonia. The project also introduces robot buses to the wider audience for the first time in Poland in the city of Gdansk, during September.

As part of the pilot in Helsinki, the participants were able to give feedback by filling an on-board passenger survey. Sami Mäkinen from FLOU has analyzed these survey results. “Most of the users have been first-timers, and nearly all of them felt the ride was both safe and secure'', Mäkinen points out.

The pilot and the survey have reached a wide audience and especially people over 60 have been eager to participate in the pilot. The reasons for choosing a robot bus over the other transportation options were bad weather and carrying heavy items. The respondents believed they could also use robot buses as part of their daily commuting journey.

Entirely driverless robot bus is not here yet. The current trials use still human labor inside the shuttle, ensuring everything runs smoothly and safely. If the steward would to be taken out of the shuttle, the robot buses should be remotely operated, similar to the air traffic control. One out of three of the Aurinkolahti survey respondents estimated they could use a robot bus without human personnel inside the shuttle.

”For us to reach the traffic emission reduction goals, the change must happen within the daily routines of our citizens. Leaving your car home requires that there is a wide range of, and above all public, transport services available. The automated public transportation provides a better service level and user experience for wider clientele”, reminds project manager Jari Honkonen from Forum Virium Helsinki.

The autonomous technology is not quite ripe enough to make a fleet of robot buses remotely controlled. However, the goal for the first driverless automated shuttles driving in Helsinki has already set to become reality in the spring 2020. That is the moment when FABULOS project’s trials start in Helsinki and five other European cities.

From public funding to serious business?

EU-funded FABULOS project has set the challenge based on the knowhow of the earlier robot bus trials and the current state of the technologies.

“FABULOS aims to reach not just a series of robot bus pilots in various European partner cities but developing the first phase of a turnkey service which any city could choose to add to their public transportation services”, explains the director of Metropolia UAS’s Smart Mobility Innovation Center, Oscar Nissin.

The final goal for FABULOS project is to produce the next generation robot bus service which solves a great deal of technological problems, from the automated shuttle to fleet control as well as the business models of the public transport integration.