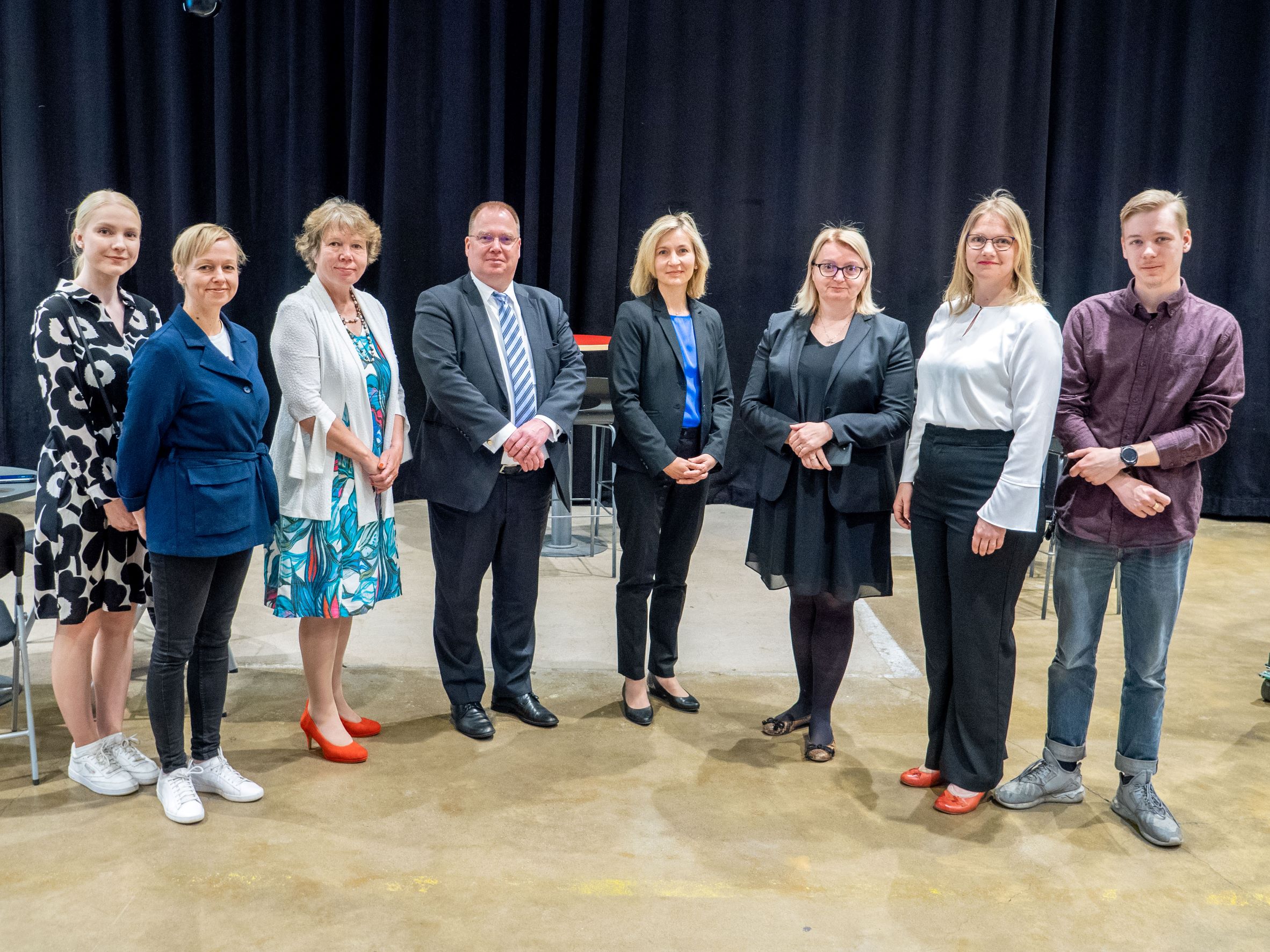 The director for Social Rights and Inclusion at the directorate general for employment, social affairs and inclusion of the European Commission (DG EMPL-D), Katarina Ivanković-Knežević, visited Helsinki on Wednesday 15 June 2022. As part of her visit, Ivanković-Knežević got to see operations and results of Metropolia University of Applied Sciences and the Re:act – Professional Networks for Youth project.

In Suvilahti, Ivanković-Knežević was welcomed by the Riitta Konkola, President and CEO of Metropolia, Aura Kaarivuo, Project Coordinator from Re:act, and the participants in the project, as well as Mia Vainikainen, Executive Director of Tiivistämö. Tiivistämö is one of the most important working and learning environments in the Re:act project.

"It is important for Metropolia to develop working life co-operation and to create ways in which students move into working life as smoothly as possible after graduation", says Konkola.

The Re:act project helps young people create networks and get to know employers

The purpose of the Re:act project is to help young people under the age of 30 who have graduated in the media and creative industries to get started in their careers, in co-operation with employers in the industry and Helsinki employment services. According to Kaarivuo, a total of 73 young people who have needed help in the early stages of their careers have taken part in the project. During the project, most of the young people have been in employment. According to Kaarivuo, networks and contacts play a very important role in employment in the creative industries.

“Face-to-face meetings between employers and young employees have proven to be an easy and effective way to get young people into working life. Young people see that employers are human, too, and there’s no need to be nervous about meeting them. At the same time, employers get to know potential new employees”, Kaarivuo says.

Kaarivuo says that more than 30 companies and other actors have been involved in the Re:act. The commitment of employer partners is important for success.

“In addition to short-term jobs, permanent employment relationships have also been established. It’s important that young employees are given enough time in the workplace – no one is a professional when they start”, she continues.

Ivanković-Knežević was interested in hearing how the Re:act project has learned to identify young people who need support with employment. She praised the project for its excellent results and meaningful work and emphasized the need to focus on the creative industries at the level of primary education. According to her, steps in the right direction have been taken in equality of the industry, but there is still work to be done.

According to Kaarivuo, the starting point is to get to know the participating young person properly and discuss what the they really want from their career and life. Only then is it possible to draw genuine conclusions or plans.

“Above all, many young people need time to find themselves and their own thing. Growing into a profession happens over time”, Kaarivuo says.

Ossi Kallio, who graduated from Metropolia's degree program in film and television in December 2021, says how important the working life contacts created during his studies have been for later employment.

“Once you get to show off your skills and positive attitude to the right people, they usually ask you for the next job. You get better and get more responsibility little by little”, says Kallio.

The Suvilahti event ended with Ivanković-Knežević's thanking the organizers for the visit, after which she moved on to Helsinki City Hall, where she attended the International Social Housing Festival.

Re:act – Professional Networks for Youth is a project implemented by Metropolia University of Applied Sciences and funded by the European Social Fund / Häme ELY Center (4/2021–11/2022). The target group of the project is young people under the age of 30 who have graduated and/or work in the industry of media and events, as well as employers in the industry. The project supports building career paths for young people, helps young people and employers find each other, and provides guidance and training for young people. https://react.metropolia.fi