Read about the impact of coronavirus on Metropolia's operations.

The conservation and documentation of medieval altar from Kumla, involving conservation students, was suggested by Swedish History Museum already in 2011. It took some years before partners as well as the model for financing the project was actually agreed upon and finalised.

As there was only one conservator for working with medieval polychromed wood at the Swedish History Museum, it was clear that such a complex project as to document, conserve and restore the whole altar of this size, including numerous sculptures and painted panels would be impossible for one person.

The project became even more actual when the museum had decided to completely rebuild its medieval exhibition, including the space the altar is exhibited at the museum.

It was a 3-year project, approved and granted (50% of the total project costs) by Nordplus in 2014 (NPHZ-2014/10043). The other 50% of the costs were covered by the participating partners as in kind costs. The key objectives were to deepen the co-operation between Nordic partners in the conservation education, increase expertise and to develop innovative practices for public engagement.

The project focused on public engagement, materials research, open-to-public conservation and dissemination of the conservation and research results of the medieval altar from Kumla, belonging to the collection of the Swedish History Museum, Stockholm.

Conservation students from the Metropolia University of Applied Sciences, Gothenburg and Oslo Universities were given an opportunity to gain practical experience, show and promote their future profession, both to the visitors of the museum as well as by using new media and public engagement skills, enabling to gain academic and professional growth in the field.

The importance of engaging museum visitors was well recognized, both on site and virtually. A Blog was kept by conservation students throughout the practical work stage of the project and the visitors had the possibility to “go behind the scene” - talk face-to face with a conservators and conservation students.

The Kumla altar web page was designed; vast amount of collected material was selected, edited and uploaded. In December 2016 the project´s web page was opened and it was planned to be hosted by the Swedish History Museum at their server from 2017 onwards.

Dissemination of the project´s stages and results gained from the whole project was one of the main goals and has been very successful as well. Dissemination has taken place in all partners’ countries and multiple times in form of seminars and lectures. 4 main dissemination seminars were held in 2016: at the Oslo University, January 2016; at the Gothenburg University, May 2016; at the Metropolia UAS, September 2016 and at the Swedish History Museum, December 2016.

Publication of the project and its results will take place at the ICOM-CC 18th Triennial conference in Copenhagen, 04. – 08. 09.2017. Pedagogical use of the material will take place through museum´s pedagogical staff. They will prepare suitable educational material directed towards and to be used by the visiting schoolchildren at different educational level.

Written questionnaire with replies to the participated students from all three partner universities.

Conserved and restored medieval Kumla altar from the collection of the Swedish History Museum.

Web page is held now at the server of the Metropolia UAS. There is a link to the Blog from the web page. 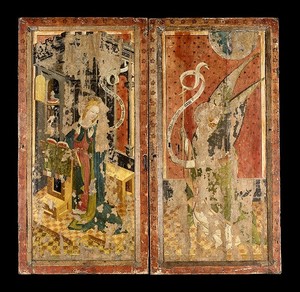